When Julia Laughlin was twenty-one, she was brutally raped, beaten, and tortured by a man she had known and trusted. Despite reporting the attack to the police and pursuing prosecution, when the case was finished and he was convicted, she found it didn’t bring an end to the effects of the trauma as she had believed it would—she was unable to put it behind her and “get on with her life.” In truth, the fallout was just beginning.

Over the next three decades, Julia worked to write her story of healing from this heinous crime and to share her personal path to healing from sexual violence. Now, at fifty-five, she has published the story that has become her life’s avocation—helping others to heal from sexual violence and to ending violence in this world. She believes that we are all connected and what happens to one happens to all.

In the thirty years since the attack, Julia has struggled to understand how sexual violence and torture affected every aspect of her life. Those years were spent searching for a way to heal from trauma that seemed impossible to ever recover from, only to ultimately learn to live with and accept it as a part of herself.

“. . . no matter that I was burned through and through, leaving only ashes. From those ashes I rose to live again and tell this story.“ 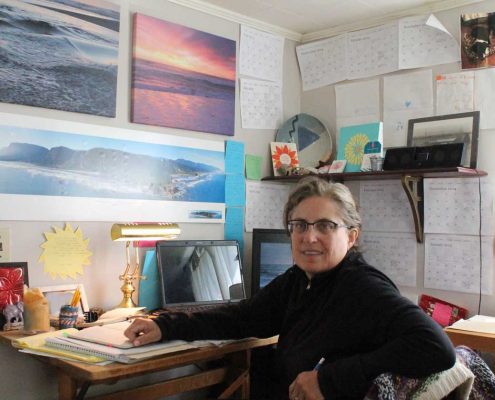 Julia has written and published this book to share what she discovered about sexual violence, how it affects a person, and how to find a way forward in living with and healing from trauma so that others whose lives has been marred by sexual violence might also find a way to heal.

Julia Laughlin lives in Washington. She works as a tribal prosecutor for an Indian tribe and lives with her two adopted dogs and the three stray cats that found her.

To learn more about her story, her book, The River and the Sea: A Story of Forgiveness is available for purchase through this website.

Let us stay in touch about new books, upcoming events, and more