The River and the Sea
A Story of Forgiveness

The River and the Sea: A Story of Forgiveness tells the story of the thirty years it took Julia Laughlin to heal from the horrific attack she suffered at age twenty-one, when she was raped, beaten, and tortured by a serial killer. The River and the Sea recounts the inspiring story of Julia’s survival—not only of the brutal rape and its aftermath, but also her tenacious struggle to find her way to heal. Writing with candor and at times with brutal honesty, Julia grapples with how the attack affected her as a mother and the legacy it left on her daughter, whose fierce love would send her on a quest to the bottom of the world to seek out a final, desperate reckoning with her past.

Julia’s story takes place on the shores of the Tasman Sea in New Zealand, where she spent a tumultuous five weeks reflecting, reliving, and writing her way through the swirling currents of thirty years of deep pain and solitary hope. The River and the Sea is the culmination of what brought her to healing—reaching forgiveness not only for the perpetrator, but for herself too. 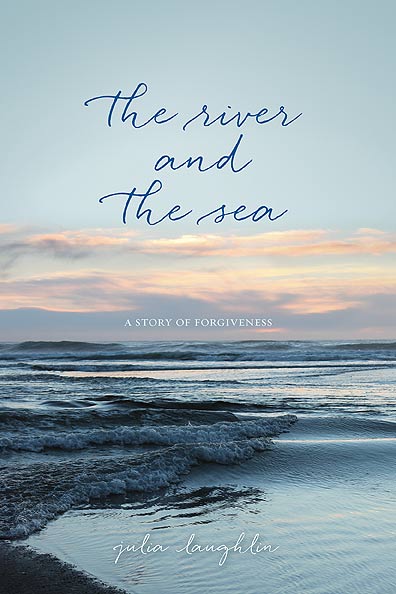 Praise for The River and the Sea

Healing can’t be forced, nor can forgiveness.  Knowing this, Julia Laughlin went half way around the world to the sea that would hold her and devoted herself year after year to learning to tell the story she hoped would free her.  Laughlin’s devotion to recovering from torture and sexual violence, no matter how hard it was and how long it took, gives this book its power.

Julia Laughlin’s book, The River and the Sea, affected me deeply. Her courageous healing journey to find her soul again and to forgive after a brutal rape has stayed with me long after finishing her story. I have not had her experience, but I know that those who have will benefit greatly and find their own healing in her heroic quest.

Carol Schaefer
Author, Grandmothers Counsel the World and
The Other Mother

NEW: Purchase a Copy Signed by the Author (U.S. shipping)

NEW: Purchase a Copy Signed by the Author (Canada shipping)

Outside the United States or Canada?  Need it faster?